Universalities: The March of “Progress” 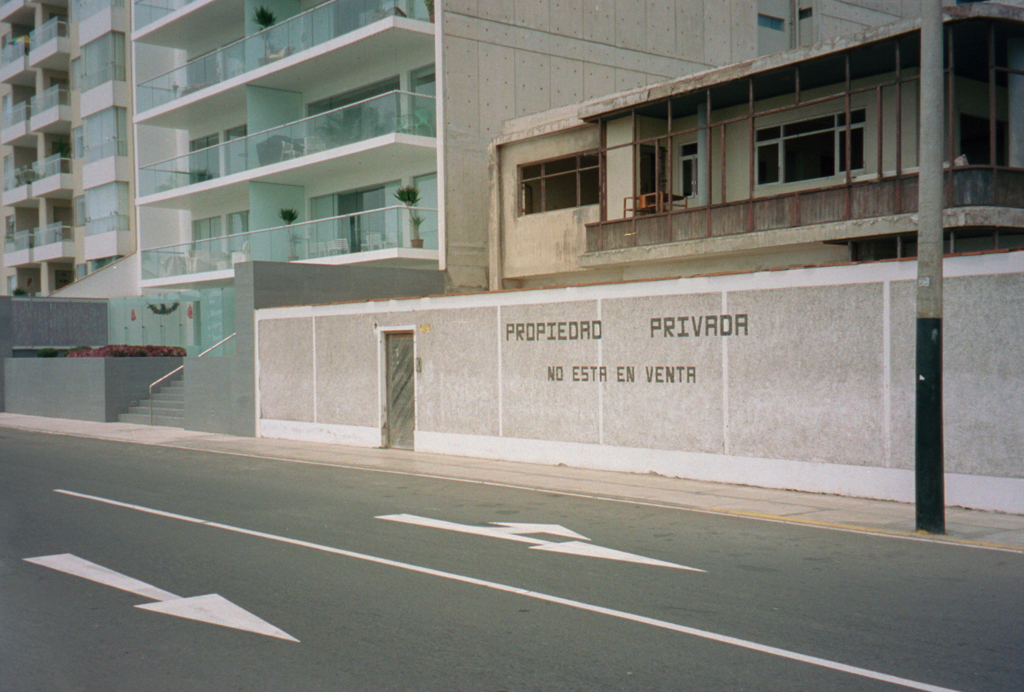 A little something I noticed in Lima that reminded me of home: displacement of existing residents in favor of developments for the wealthy. Throughout Miraflores, wedged between the new sleek glass towers, several older properties stand as small signs of what existed here before. Some are well lived in, some are in various states of disrepair. Many were easy to pick out by the large signs painted on their exterior walls, such as this one:

“Private Property. Not for sale.”

Things are a bit different here in San Francisco, where it’s mostly renters with no ownership of their homes and apartments who are being pushed out by eviction and rent increases, while it appears that most of these homes in Lima are privately owned. However, that the owners feel it worthwhile to scrawl these large messages on their homes suggests that there must be some pressure on these homeowners in Lima to sell. Where that pressure comes from and in what form it arrives, I could only guess, but I certainly wouldn’t be surprised to learn that it follows some version of the typical formula with those with the money influencing those in the government to tilt things in their favor.

Though the mechanisms and policies are likely different, as someone living in San Francisco, this underlying struggle all felt really close to home.

Another obvious difference was that, here in San Francisco, while pretty much couldn’t give two fucks about the people living in them, there is no way in hell we’re going to let you lay a hand on our historic buildings. In Lima, on the other hand, it seems that nearly the entire district has been leveled and replaced by a forest of glass towers in the past 40 years. I have no idea what Miraflores looked like before, but the neighborhood of today is sleek and shiny and new, and felt so sterile.  The restaurants were great, the streets were safe, there was that cute little park with the cats, but it felt as though there was no history here, no soul. I guess San Francisco has that going for it: When all of the people and businesses that made San Francisco interesting and unique are gone, at least they’ll leave behind a pretty shell…

Do I sound too dejected here? I’m just tired of hearing of friends, acquaintances, and wonderful people I’ve never had the pleasure of meeting who have given their all to create some good in this city unceremoniously shown to the door.

San Francisco, my adopted home, the place I never planned to stay and the place where I discovered something special that I couldn’t imagine leaving: I love you like no other place, and I still find myself delighted each time I catch a little glimmer of the magic that makes you so special, but you can also be a bit of a downer these days.

I don’t have the answers. Part of the solution certainly lies in building a fuckton more housing, but surely there’s more to it than just creating enough boxes to put everyone in. Maybe we’d make some progress if we all could just try giving a shit about the hardships and struggles that our friends/neighbors/fellow San Franciscans face. Maybe we should see what happens when we stop and actually do something to help each other out. There’s still a lot of good here, what can we do to save and nurture that magic?

I’m sure there’s more that I could be doing day to day, and I’m sure that’s true for most of us out here.

(Taken on a cliffside run down el Malécon in Lima, with Kodak Portra 400 in an Olympus Stylus 120: A fairly shitty little $20 used camera, but it fits well in my hand when I run…)